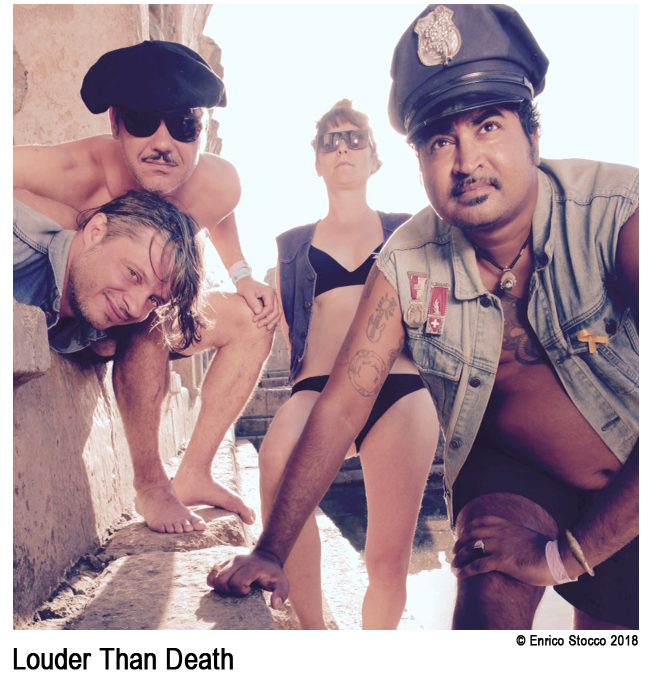 Through In The Red Records, King Khan has launched a new EP as King khan LTD. Originally created with Sean & Erin (from The Spits), Drew Owen (Sick Thoughts) and Saba Lou (song recorded with Erin Spits when she was five years old!!!), King Khan now sings with the two members of Magnetix and Fredovich (Shrines).

Negative Growth, the third full-length from Memphis’ Ex-Cult, is a continuous onslaught of bristling, blaring, mono-tonal punk songs that run zig zag through dystopia dodging rifle fire and tossing hand grenades. There are no duds here, and no dramatic departures. The cuts hurtle on, one after another, like bad news that comes in nines, blistering the ground as they pass and deepening the surrounding pall of smoke. You could pick a high point by dropping in at any point on the album (though bonus for you if you land on “Hollywood Heat Seeker”).

No knock here — this is clearly one of the best punk albums of 2016 — but the tracks all sound the same, spike-y, clanking, infuriated howls of urban disaffection, spewed poetry, pick-clawed bass lines that rattle like prison chains. They also sound very much like the songs on Midnight Passenger. They are rock ‘n roll chaos embodied, but also weirdly consistent, like a shrapnel bomb that goes off the same way every time.

Ty Segall, who plays in GØGGS with Ex-Cult singer Chris Shaw, helped record Negative Growth and you can possibly discern his influence in the louder, sharper dual guitar sound (that’s JB Horrell and Alec McIntyre clanging out the riffs). Shaw told one interviewer that they’d used no guitar amps at all, instead feeding the guitars directly into the soundboard. Still it’s shades of on fire, really. The sound is not so terribly different.

Which is to say, it’s very, very good, tightly played so that everything works structurally, but blown out in a haze of smoke and dissonance and rage. It’s cohesive enough to thump in your chest like an extra heart, but dizzying, too, disorienting even. Catharsis works on both levels, in the visceral thud and rattle of sensory thrall and in the headier escapes of psychedelic flight. There’s been a lot of chatter about how Ex-Cult is a negative band and this album (aptly named) is a downer, too, but I hear more defiance and resilience. I’d put them in the same class as the Wipers, a band that made social disaffection pound you and illuminate you. Negative Growth is growth, too.” Dusted